The following mind-meander was written during the US Presidential elections, months before the official release of WW and at a time when only the official trailer was made public.

On this glorious day in 2019, in sunny Australia, the arguments embedded in this article still stand 🙂 AND I am so glad Captain Marvel 2019, starring Carol Danvers/Brie Larson, has reached our world free of micro-skirts and pointy breasts, feet solidly planted inside ‘real captain boots. Woohoo!

October 12, 2016 – It has just been announced that Wonder Woman, the actual comic book character [not Lynda Carter, actress in the 1975 TV series] would become an honorary ambassador in support of the UN’s sustainable development goal number five which is “to achieve gender equality and empower all women and girls”.

Not surprisingly, the announcement was met with a silent protest, mostly from women, who voiced concerns over WW’s ‘overtly sexualised image’ that is not ‘culturally encompassing or sensitive.’

A petition to rethink the shortlist of honorary ambassador candidates was quick to follow.

Why on earth think that a white, over-sexualised character whose words are trimmed to fit inside bubbles and who has never stepped in or out of a frame independently of the will of her male creator, could be an appropriate icon to represent women of all ages and ethnic backgrounds beyond 2016?

Seriously, short of giving each one of us a pair of her bullet-deflecting bracelets made of that ultra-rare Amazonium metal, how would WW ‘empower’ any of us, women?

All jokes aside, the decision to name WW the flag-bearer for Women in Charge of their Lives and Respected by All could not have been made by one man alone – and it can be assumed that the Republican candidate, Donald Trump, was not on the panel.

The idea was in the works for months and months.

The plan and the shortlist of candidates was submitted to panels and voted upon before being announced to the public today.

So … again, it would seem that a sexy caricature of femininity, endowed with an athletic physique, an inviting bust, long legs enhanced by high heels and yielding pretend power must be how enough people at the top still define Woman – here and now.

As an aside, the UN, founded in 1945, one of the main defenders of gender equality and the empowerment of women worldwide, has yet to appoint its first female Secretary-General.

What? Not one woman found competent enough in 71 years?

The Remedy towards Equality?

Here is the full quote from Dr William Moulton Marston, the creator of WW: ‘Not even girls,’ he explained, ‘want to be girls so long as our feminine archetype lacks force, strength, and power. Not wanting to be girls, they don’t want to be tender, submissive, peace-loving as good women are. Women’s strong qualities have become despised because of their weakness. The obvious remedy is to create a feminine character with all the strength of Superman plus all the allure of a good and beautiful woman.’

Creating a female superhero may have seemed the only obvious way to achieve gender equity back in 1941, the year of WW’s debut, but isn’t it a bit tragic that such thinking should remain the only line of thought 76 years later?

Is this really the most obvious pathway to reducing domestic violence? How would iconic Wonder Woman, as an honorary ambassador, do her bit to eradicate from our culture the rape, in its many guises, of girls and women of all ages?

Even aeons before 1941, girls and, presumably, women, too, had internalised that Man equated ‘a peace-loving, good and tender nature’ [a hint of Woman’s true karmic essence] with submissiveness.

Sure, being seen as that and only that was not an appealing option, already then.

Not In Women’s Bathrooms?

February 26, 1980, in The Tuscaloosa News, Lynda Carter was quoted saying, “I never meant to be a sexual object for anyone but my husband. I never thought a picture of my body would be tacked up in men’s bathrooms. I hate men looking at me and thinking about what they think. I know what they think. They write and tell me.”

Since 1941 what, exactly, has changed in Man’s psyche? What have we, Man and Woman, co-created alongside each other? Whatever that is, it IS what has gone on plaguing our civilisation, year in/year out not only since 1941 but for the past millennia. Fingers crossed that the ugliness of that co-creation is not running on an endless supply of ‘renewable’ energy.

There Is An Upside To All This

According to the first images released of WW in her latest 2017 incarnation, beyond the still tantalising breasts and long legs, the newfangled bodysuit appears … armoured. Phew!

Argh, but still …all is not well. Gal Gadot, cast as the superhero, explained: ‘They said that I was too skinny and my boobs were too small. When I was younger, I would take criticism really hard. But now it mostly amuses me. The true Amazons had one boob so it won’t bother them in their archery. So, it’s not going to be like real Amazons. We always try to make everyone happy but we can’t.’

It might be little consolation to Lynda Carter to hear that, 36 years on since the ’80s, breasts, even steel-plated ones, remain a potential make or break factor worthy of inflamed comments.

Question: How to demean a powerful woman?

Answer: Use an old and enduring strategy. Reduce the woman to her appearance and criticise that.

Film Director Patty Jenkins quipped about the costumes and aesthetic aspects of her characters: “To me, they shouldn’t be dressed in armour like men,” Jenkins says of the women’s battle wear. “It should be different. It should be authentic and real – and appealing to women.”

A wardrobe that features women’s sculpted shoulders, long and toned legs, lavish brocade gowns and drapes that cover to better reveal, exotic jewellery and high heels has been carefully crafted for the benefit of … women?

Seriously? For women, not girls? Not for boys and men?

Ms Jenkins added, “I, as a woman, want her to be sexy, hot as hell, fight like a badass, and look great at the same time. The same way men want Superman to have ridiculously huge pecs and an impractically big body. That makes them feel like the hero they want to be. And my hero, in my head, has really long legs.”

Is it possible that the film director has yet to notice how a woman’s well-defined shoulders, firm breasts and long legs affect men quite differently than well-developed pecs and a Superman-type of ‘impractical’ body affect women?

Gender-Equality In The Boots

And then, aren’t the wedge heels of WW’s boots a bit over-the-top for this woman who, in 2017, has to run a heck of a lot faster than she did in 1941? She does, after all, have to outrun and pursue much more aggressive bad guys these days. She has to scale trenches, spin, slide and flip to dodge bullets. She probably has to clamber over upturned armoured vehicles, as well.

But what is there to reply when WW, in the official trailer that has just been released, declares categorically, ‘What I do [and how I do it] is not up to you!’

Uh … one more thing: on the topic of ‘impractical’, if such heels as WW,’s are not totally impractical for an action hero, then, what are the odds that the upcoming incarnations of Super Man, Captain America and Batman are already set to adopt a 5 inch ‘man heel’ bolted on to their new look, kick-butt armoured boots?

True, WW is not and, worse, her karmic destiny will never allow coming close. Yes, she might outsell Superman-the-doll. She might tug at the imagination of young girls. What is unclear is how she will empower these girls in the schoolyards, in their streets and in their homes.

Time will tell whether the UN has reconsidered their decision but, for now, I am just happy their choice of honorary ambassador has been so wrong and so timely as to provide my argument against cultural misogyny with new fodder.

Serious question #1: can biological Man and Woman ever be considered ‘gender-equal’ despite their physical characteristics and specific energies?

Serious question #2: if, only for a moment, we agree that biological Woman can, one day, be considered gender-equal to Man, will she, by then, have gained insight into how to connect with her authentic self, her true karmic essence?

By then, will Woman have become more actively accepting, genuinely compassionate and altruistically nurturing in the home, in the streets and in the workplace – here, on planet Earth, or on a workstation in outer space?

In short, will she have found a way to hack into her culture-induced, default mindset, to hook up with the best version of herself? Will Woman finally achieve coherence doing what she loves most from the inside/out?

Bottom Line: Doing our best to copy, emulate, out-do boys and men in any area, however liberating it might feel in the moment, brings us as little long-lasting contentment, health and well-being as it has brought to men – even to the men we know and love.

Just as the Yin and Yang symbol illustrates how forces that seem opposite do, in fact, complement each other, Man’s and Woman’s energies are engineered to complement each other. It is only through the joining of their inner nature that, one day, two working as one, they will succeed in co-creating a much more egalitarian, thriving culture than any of recent and distant memory – even in the absence of bracelets made of ultra-rare Amazonium metal. 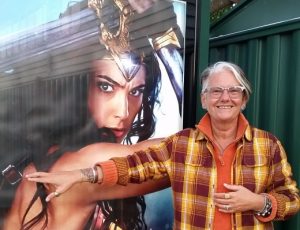 Yay! WW has finally made the jump across the ocean to reach Australia 😊 I missed her arrival 13 days ago, but Gold Class seats in front of a BIG screen, here we come!

Why? Because the little girl in me has always been a sucker for female, comic book inspired, heroes who kick-ass to right wrongs. :-))

P.S. By the way, dear Reader, I’d love your support in spreading the word about All Matters on the Heart & Soul of our Culture!