The first spark of interest in my chosen belief system occurred in 2006 when synchronicity found an odd but effective way to ignite an across-the-world connection with a secular woman in her sixties, a widow who had been living on her own for some twenty years already. Yudit Cohen-Shoore was also known by a few close ones as Moriya.

Yudit did not dream of having more money in the bank than she already had. Owning neither TV nor car and not wishing to escape from her daily routine by embarking on holidays, Yudit’s needs were modest. She earned her living in the same way she had in the past. Her client base was made up of a dozen faithful university professors for whom she typed, edited and formatted manuscripts written in Hebrew. Her schedule of fees was the same in 2016 as in 1996.

Yudit lived in Jerusalem, Israel, and I, in Brisbane, Australia, but distance is no object when ‘things’ are meant to happen and, almost in the blink of an eye, sight unseen, this person became my first and only spiritual mentor. 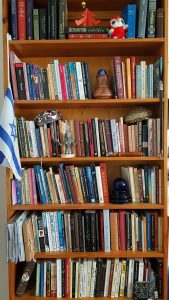 From that initial karmic spark of interest ensued ten years almost to the day of daily and long emailed dialogues on the spiritual, religious and esoteric themes of Yudit’s choosing.

As it turned out, Yudit was a widely-read, ascetic woman, as well versed in Judaism and the Kabbalah as she was in the Vedas, Zen Buddhism and its sacred texts. Ranging from the works of prophets to poets, she was also familiar with the doctrines of Christianity and Islam. She was equally at ease with broader esoteric science and with the findings of neuroscience as she came across them on the web.

Selfless was the dedication it took Yudit, for my benefit, to pare down the richness of the thoughts that came to her, in Hebrew, to a much-simplified translation into English, a language she learned in high school but practised after that only by reading many books written in English, one after another.

Dedication, too, kept her typing every evening, Jerusalem time.

As she explained early on, too much knowledge imparted too quickly is often counter-productive. As the filaments of a light bulb can only take so much heat per unit of time without overheating or blowing up, the brain can absorb and process correctly only so much ‘rewiring’ of information per unit of time, before it feels overloaded. Moreover, so, for precisely ten years and one month, regardless of her daily circumstances, Yudit made time to scaffold her content to suit the pace of my need-to-know.

It could also be said that Yudit’s guidance was a ‘thank-less’ task if, by that, it is understood that throughout the years of her tutelage, she did not wish to be thanked by either gifts or money. Not even by little donations. Instead of strings of thank yous, what she appreciated most was the certitude that she was not wasting her time on yet another dilettante student.

Perhaps surprisingly, Yudit did not meditate. Early on, she explained that, instead, she merely observed the world immediately in front of her. “And,” she added, “I also observe the shifts within me.”

The world in front of Yudit was literally what was present in her line of vision, inches away, between her hands and under her feet.

Observing those things consciously had become, years earlier, her form of meditation.

“When you make a cup of coffee, breathe,” she urged. “Imagine an entity looking at you from above and asking, What is CC doing right now? Look at your hands and see that the answer is: CC is turning the tap to fill the kettle. Pause. She is looking for her cup. Stop before your hand grabs the jar of coffee. Be in the moment as you remove the lid. You look for a spoon. You watch the swirls of coffee dissolve in the water. Be aware of such little actions. They are the only concrete things anyone does all day. Tiny actions non-stop are what humans do.”

Yudit continued, “When you walk your dog, don’t just walk the dog. Walk WITH your dog. See. Smell. Listen. Breathe. Look up and around as he does. Don’t be like those who block off all senses with their earphones.

When you are in the shower, listen for sounds. Notice the patterns splashes make on the floor. Feel the strength and the temperature of the water. On your face, it feels different than on your feet, ken?”

“Always take a second out of your schedule to feel what you touch and don’t let other thoughts come in through cracks. Oh, surely they’ll sneak in any way but let them go, and return to your senses.”

Yudit asked rhetorically, “Being aware of what your eyes, your hands and feet are doing is a very useful practice, don’t you think?” She must have anticipated a reticence on my part for she added, “How else can you be in the moment or present anywhere if you don’t know what your body parts are doing at that moment?”

I rolled my eyes and grumbled but, as I reached for the mouse, I made myself pause long enough to be aware of the shape cradled by my thumb and fingers. I nodded. However, as soon as I began typing my reply, I promptly lost all awareness of the mouse and of the clickety sound of the keys under my fingertips. “Yes, it’s a great idea but, OMG! Yudit, who can sustain THAT for more than a couple of minutes?”

Patiently, Yudit replied, “Wake up and be aware. Don’t be lazy. One day, maybe, the preparation of your dinner will become a real hands-on meditation. Because you think like an ignoramus, it will take you many weeks, even months, to learn, so start now! When you eat, chew slowly. Breathe. Take pleasure. Say thank you to the fish or chicken that lost his life just so you could eat healthily.”

Though we had yet to meet in person, I imagined Yudit shaking her head benignly as she typed on, undeterred. A lone woman on the Path with a very human mission is what she was. She also had a wry sense of humour.

In regards to my early days’ lack of enthusiasm when it came to learning the skill of being in the moment, the next day she had jokingly typed back, “What is it, CC? How can it be that, suddenly, you no longer think it’s useful to do two things at the same time? Isn’t it what multi-tasking is about?”