By pushing herself to keep our written conversations relevant and thorough, day in/day out, over so many years, Yudit demonstrated ‘in the moment’ the rigour and commitment, the discipline, necessary to make any new intention a long-term improvement that eventually became a part of one’s enhanced identity.

Her only expectation was that I would duplicate her commitment – daily. That and her occasional gruffness which I knew was partly cultural reminded me of the stern, no-nonsense discipline exacted by Buddhist monks towards novices.

At least, I didn’t have to get up at 4 a.m. to pray and sweep the monastery floors. Besides I, soon, got used to the abruptness of Yudit’s tone, including her use of the word ‘ignoramus’ which she typed whenever she suspected I had once again fallen asleep at the wheel, letting my Ego-persona react in my name, which was often the case. Of course, I never took it as a put-down, and after a few months, she began referring to me as ‘ahoti haketana’, my little sister.

Yudit explained that the uniqueness of our spontaneous, across-the-world connection, its purpose and depth, were sure signs that, in the never-ending cosmic cycle, our souls had already been in one or more close teaching/learning partnerships before. And, for reasons best known in the realm of souls, resuming this partnership to improve it further in this lifetime had been deemed necessary. Her reasoning indeed went some way in explaining why this impromptu arrangement had so quickly become familiar to us and so enduring – and so fruitful for me.

Early exploration under Yudit’s wing led me to the overlapping philosophies of Al-Ghazali, one of the most influential philosophers and mystics of Sunni Islam with those of Swami Vivekananda, a significant player in the revival of Hinduism in India and the key figure who introduced the Indian philosophies to the West

One day, the postman delivered a rather large and heavy box stamped with an Israeli postmark. Two similar, heavy boxes soon followed it. Unannounced, Yudit had sent me the favourites in her collection of books written by Alexandra David Neel, P.D. Ouspensky, Maurice Nicoll, Paul Brunton, Alan Watts, Idries Shah, and others who had been instrumental in shaping her own understanding of non-religious spirituality.

Weeks later, somewhere within the thousands of bound pages, Yudit had sent me, among other treasures, I came across a line from Alan Watts who, by then, had become my favourite philosopher of his era. This man knew better than to confuse spirituality with divine thoughts. “When one is peeling potatoes,” he wrote in The Way of Zen, “Zen spirituality is just to peel the potatoes.” That sounded very familiar indeed.

That said, Alan Watts, like so many other highly influential spiritualists, had not walked straight down the Path. Married three times and an excessive drinker, he argued that absolute morality was in no way linked to one’s most profound spiritual identity.

More recently, the writings of Don Miguel Ruiz, Gregg Braden, Doc Childre, Yuval Noah Harari, Terry Patten and that of other philosopher-visionaries, past and present, have consolidated my interest in a modern approach to spirituality within     a pragmatic, functional perspective that, for the most part, has its many benefits confirmed by the latest findings in neuroscience.

The absorbing but demanding, silent, keyboard exchanges with Yudit, my ‘perfect stranger’, were peppered with deconstructions of the otherwise trivial occurrences that ‘just happened’ to catch our eye or ear on any given day.

From symbolic interpretations of clues embedded in our dreams, in casual utterances pronounced by others and in the significance of innocuous objects that seem to randomly come within our line of vision, indeed, for the one who is awake and aware, soul-inspired messages and synchronicity abound all around. Understand what others call coincidences and do your best to decode their meanings. It’s the only way Soul has to interact with us. So, pay heed, CC. Stay awake and use your eyes!” Yudit admonished.”

A fluent user of the internet, she would point me to TED talks, YouTube clips, films and websites relevant to what she had in mind to help me understand differently in regards to life as I thought I knew it.

Pulling ideas apart to rebuild or dump them was often the starting point of our varied and challenging chains of emails. Daring me to activate critical thinking in regards to matters of conscious evolution, religious bias and cultural shortcomings, Yudit would explain the strengths and point out the flaws in the presenters’ content.

As an aside, though it is used quite often these days, the term conscious evolution is hardly a modern one. Mary Parker Follett, a political theorist and philosopher, coined it in 1918. “Conscious evolution,” she said, “means giving less and less place to herd instinct and more to the group imperative.”

By the term ‘group imperative’, Mary Parker Follet presumably meant behaving/responding in a manner that works ‘for the greater good of all.’

“We are emerging from our gregarious condition,” she wrote in The New State, “and are now to enter on the rational way of living by scanning our relations to one another, instead of bluntly feeling them, and so adjusting them that unimpeded progress on this higher plane is secured.”

Mary Parker Follett may well have been an enthusiastic optimist considering that, one hundred years later, we are still struggling to muster a degree of the awareness required to meet her imperative and break away from a herd mentality, the first specific mindset that, very early on, Yudit had urged me to sidestep.

If one could integrate best practices simply by observing them enacted by one as humble and as dedicated as Yudit, I would have a twinkle and not just in my eyes. I would have been in the flow long ago. 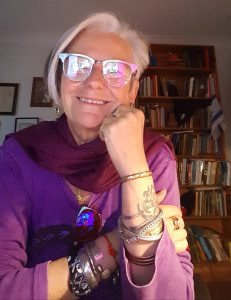