It began quite some time ago when I came home feeling particularly fragile after a night on the scene. Though I had never kept a diary, I picked up a notepad and jotted down remembered flashes of discomfort related to the alienating nature of the night’s experience. The following day, I found myself fleshing out these snippets of raw emotion into full sentences and paragraphs, which later became the opening chapter of  North and Left from Here 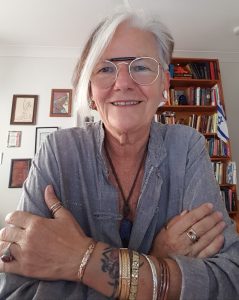 Born of French parents in Casablanca, I am a native French speaker, although I completed my formal education in the United States at The University of Texas [Austin], majoring in English Literature.

Around 2000, I launched into the writing of lesbian romance novels with a definite slant on social realism made possible by characters cast as women who empower themselves to struggle out of their adverse situations.

I went on to self-publish seven books, the best-selling ones being Silent Goodbyes, Jagged Dreams, Far From Maddy and its sequel centred around an empathetic FTM character, Morgan in the Mirror.

It is around 2006 that I chose to confine my writing to All Matters of the Soul. I also stopped promoting my novels and short stories.

The line of inquiry led by my mentor, Yudit Cohen-Shoore, who resided in Jerusalem, Israel, has taken me on a 13-year [ongoing] journey of transformational spirituality through deepening my understanding of What-Is underfoot.

Nothing works better than a moment by moment practice intended to clarity, through coherence, the emotions of the heart and the thoughts, intentions, actions, reactions and inactions triggered in our mind.

I have since published many articles which have been revised and gathered along with fresh material in the first two books of my series, Stepping Stones To The Top Of The World [volumes 1 and 2] – amalgams of mind meanders on all matters of the heart and soul of our culture with a strong slant towards inner wellness and transformational spirituality.

Both volumes have been set up as free downloads off my website, www.ccsaint-clair.com.

Each chapter of these books gives a fresh insight into what Karma and Soul really are and into what unconditional love really means, here and now, namely being aware and accepting What-Is while blocking out recurring flurries of What-Ifs. 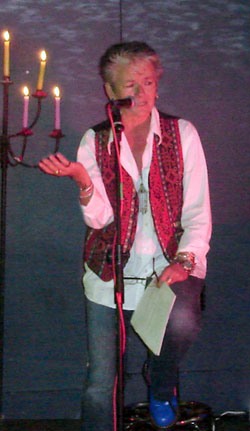 These classic concepts of psychology and Zen spirituality leading to an ‘empty mind’, [oddly named ‘mindfulness’], are brought together to create, a genuine rewiring of the brain.

Interestingly, new findings in the field of neuroscience, along with research in stress management and heart intelligence, corroborate the importance of activating these concepts throughout the many separate moments that, daily, present themselves in the series of moments underfoot.

Stepping Stones To The Top Of The World, Volume 3 [I Am] is well underway. Several of its sections can be found under the Mind-Meandering tab on this site. 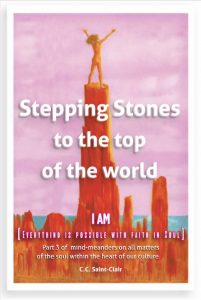 The manuscript has shaped itself as a series of mind-meanderings at the heart of the thoughts, customs, and social behaviours particular to our era as, globally we anticipate crises of unknown magnitude.

Another of my recent endeavours focuses on the conundrum posed by Jesus of the Christian faith and his historicity.

Did such a historical figure ever really exist?

What if the Jesus of the New Testament fame had been adapted from a Hebrew prototype named Yeshua?

Such questions have resulted in a long series of articles entitled Seeking Jesus in All the Right Places and a novella focusing on the last 24 hours during which Jesus was taken from Gethsemane, at the foot of the Mount of Olives, to Arimathea after his crucifixion.

Both texts are now combined into one eBook entitled Jesus – Man-Myth or Son of God which is available from this site as a free download.

It is commonly agreed that the gospel writers were heavily inspired by the Five Books of Moses – known as the Torah – and by the Book of [Hebrew] Prophets.

So am I – but from a secular perspective.

As you can imagine, dear Reader, all of this has been keeping me busy – and out of trouble – for quite some time already 🙂