In between her sixth and seventh novels, C.C. Saint-Clair has released the second edition of her first book. North and Left from Here [Take II].

This debut novel introduced a series of trademark romantic and sensual plots, each centred around Alex, a strong lesbian character, her quest for love, the meaning of her life and elusive inner-contentment. North was soon followed by two stand-alone novels, Benchmarks and Silent Goodbyes.

Though the sensuality of her writing appeals beyond label boundaries, her work quickly attracted the tag of ‘the thinking woman’s lesbian romance’. It is a description that captures both the sensual romanticism and the socio-political realism underpinning her storylines in which reflections on the choices we make, the risks we take and (un)resolved personal issues rise to the surface.

Here enters Morgan, of Morgan In The Mirror, Saint-Clair’s most recent protagonist, a young female-to-male transgender, and his battle to define himself as a trans man and, ultimately, as a man.

Certain experiences have propelled Saint-Clair towards feminism: the influence of a strong mother, an early preference for the companionship of women, despite a Jewish/Catholic heritage, and a life of travel which forced her to become resourceful and resilient at a young age. Some of the moments and emotions experienced along the way have yielded indelible freeze-frame moments that have inspired some of her reflective, fictional narratives.

Though Saint-Clair is happy to go along with the tag that has cast her as a lesbian romance writer for the ‘thinking woman’, she says that, neither airbrushed nor glamorous, though admittedly attractive in their own idiosyncratic way, her ‘women’ are not typical romance heroines in that they do not need rescuing. They rescue themselves but not from any physical danger. Their quest is emotional fulfilment within their ordinary lives, not only as teachers, police women, veterinary surgeons and mechanics but also as disengaged Gen-Xers.

“There are no fires, no shipwrecks, no murders. And the irony is that within this simplicity lies the complexity of life and love’s role in defining it.”

Saint-Clair is as passionate about the sensuality of her writing as she is about exposing the readers of her brand of romance to the emotionally harsh landscape that she believes is the real-life backdrop against which many women have to struggle before they come into their own. 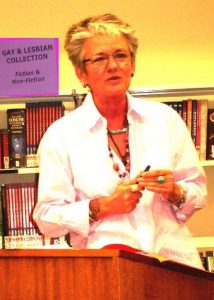 Born of French parents in Casablanca, Saint-Clair is a native French speaker, although she completed her formal education in the United States at The University of Texas, majoring in English Literature.

Like Alex Delaforêt, one of her main characters, Saint-Clair lives in Australia. However, unlike Alex whose feelings of loss, regret, anger and loneliness have been folding her inwards since separating from her younger lover, Tamara, Saint-Clair is happily settled with Myahr B., her partner of 22 years at the time of writing, and Oscar, their much-loved, furry companion.

Upon her returned from a trip to her hometown in the South of France, in 2006, Saint-Clair decided to ‘jump genres’ and embark on a totally different writing pursuit – secular spirituality with a focus on all matters of the heart and soul of our culture.