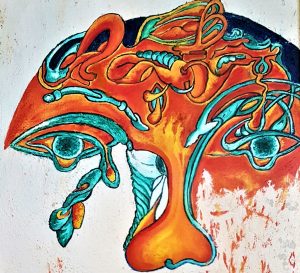 Within the context of this little mind-meander, I’ll suggest that our body is a one-of-a-kind, karmically engineered, nature-made, coherent and resilient entity.

It is a part of humanity, the most remarkable collective planet Earth has ever birthed.

And this is how we are intended to re-imagine ourselves.

Fully clothed and only veiled by limited artifices – ‘au naturel’.

These days, it’s fairly common knowledge that all that we think, feel and experience forms the beliefs we have about others and about our selves, too.

These beliefs, in turn, shape our thoughts and, therefore, our actions and inactions as well.

The problem is that 95% of ‘that’ happens in the unconscious part of our mind.

And, just like the invisible programs that run our devices, our unconscious mind runs us.

When left unchecked, these drivers often end up high jacking our mental and physical health.

Many factors have contributed to the objectification of girls and women, the cause of ongoing, aeons-old, inter-generational trauma.

So, it’s up to each of us to identify and update the feelings and thoughts running our system.

It’s crucial to control them and reshape them in the direction of our choosing.

With that in mind, as neutral observers of ourselves and others within our culture’s social fabric, we can identify which of our feelings and thoughts get a thumbs up and which ones don’t.

We can attempt that as an alternative to letting the gaze of others estimate our personal worth and feed that assessment back at us.

We don’t understand that it’s just a non-neutral, micro perception of the reality of us.

And the energy of ‘that’ perception is what we accept as real about our selves.

Reality check: the concept of coherence and oneness is not about shedding our ego-persona.

We wouldn’t be able to, even if we wanted to.

She is our ‘other’ body.

We only want to take the reins off her to sit in the saddle squarely and safely.

And to, mindfully, choose our own responses to life’s ups and downs.

Bottom line: it’s always and ‘only’ about working with our self– not against her.

On that note, our PB (personal best) is aimed at achieving maximal individuality by neutrally observing our weaknesses and developing our unique strengths.

But we don’t live isolated in a bubble.

So, we also learn to value those of the people who, known and unknown, come within our line of vision from near and far.

These people are those who live under our roofs.

They are those who, too, are karmically positioned as parts of our extended clans and friendship groups.

Seen or unseen, known or unknown, they are all those who exist here, there and everywhere on Earth.

Heads up: our PB is best achieved when we engage in ‘inspired’ activism – one holistic response at a time.

Seen through that lens, of course, anyone, including boys and men, who also walk free of artifices and hand-on-heart, are not only parts of the ‘other half’ of that collective. They are a most welcome and most necessary presence.

Once our practice of neutral observation and alignment of gut intuition, heart and mind takes off, we eventually bring health to our bodies.

We eat, drink and respond intuitively and healthily.

We become curious as to what new places this will take us.

We believe in our potential for contentment.

Heads up: by allowing our intentions to up-level us, moment by moment of clarity, we built a step ladder of heart-based coherence.

By allowing our selves to show up as authentic individuals on/off ‘screen’. In and away from others’ line of vision.

Mind-meandering over a couple of pet peeves: Only briefly, in the 70s, for those who wanted to cut loose from conventional fashion and those who did not opt-in for miniskirts and hot pants, the Hippie fashion, continued from the 60s, was a colourful explosion of exciting, exotic and attractive maxi dresses and tops for girls and women.

Buns and chignons had become seriously old-fashioned. They never dreamt of a 21st century come back.

Hot pants could be by-passed.

Hair was long and flowing freely.

Back then, fashion allowed a fair dose of individuality.

It worked well for men, too.

Back then, multi-colour was a unisex ‘colour’.

Once limited to the ‘little black dress’ and the tuxedo, black, the colour associated with death, the ancestral colour of mourning, has become one of the ‘fave’ colours of the moment.

Today, so many who jog or simply walk tend to do so in black yoga pants, shorts, socks, T-shirts, sneakers and caps.

Black is the outdoors colour for many.

It also comes in children’s sizes.

Back then, jeans were not machine ‘distressed’.

They were not manufactured in sweatshops.

Back then, well-worn jeans became naturally ripped by sustained wear and tear.

When they got too ripped, we extended their lifespan as … cut-offs.

And, luckily for some of us, such jeans are still available today.

Once upon a time, no one thought to keep their ‘tennis shoes’ and basketball Converse immaculately clean. They, too, when well-loved, were well-worn.

Like our jeans, they were symbols of our real or imagined resilience – our capacity to reframe unsolicited, challenging thoughts and align them with our best intentions.

Oddly, today any spill or dirt on out-of-the-box pristine ‘sneakers’ is much more of an issue than bad breath or body odour.

Serious question: why, in this era of unprecedented fears and gloom, at a time we – and the world – need all the light we can shine, are there so many of us, black-masked persons, crossing each other’s paths – on and off-screen?

Reality check: interestingly, black is the only colour that does not exist in Nature.

Black coffee is not black.

Not even a crow’s feathers are pure black.

In the sun, they shimmer in shades of dark blue and dark purple, too.

Bottom line: sadly, the Hippie style was only a short-lived one.

Too soon, women’s fashion was returned to its highly sexualised past.

Back to topic: on the topic of ‘old school’, circa 2500 BC, a statue of Princess Nofret of the Fourth Dynasty of Egypt depicts her wearing what probably was a black wig, thick eye-widening lines of kohl, dark eyebrows not unlike those currently in fashion and a powder-smoothed very fair face.

The plunging neckline of a semi-transparent, clingy garment emphasised Nofret’s breasts and hardened her nipples, too.

Was the princess cold or aroused?

Or did the sculptor project his fantasies onto his subject – we will never know.

What we do know is that some 5000 years later, the princess’ breasts have been ‘immortalised’ by never-ending waves of girls and women who have never felt the urge to question the feminised practice of ‘vamping’ up – a practice that is truly … terribly ancient.

In Europe, from the 11th century onwards, garments were designed to expose women’s chests. Cleavage enhanced by breasts compressed upward was uncontroversial.

Reality check: already then, it was a given that men liked to gaze at breasts and, very obligingly, women gave men what men liked best.

Yes, we know. Males and babies have one thing in common.

Like all mammals, they are all attracted to ‘female’ breasts.

Of course, we understand how breast-suckling is essential for babies, but when it comes to the root attraction of males to breasts, we loop back to the impulses of Neanderthal males and the urge to procreate wired deep inside their brains.

Our earliest ancestors knew nothing more than to mate to procreate.

Or, putting it more bluntly in keeping with modern parlance, they knew nothing more than to f—k.

Of course, the males used force.

Of course, they occasionally killed non-compliant females to satisfy that urge.

Similarly, orangutans, too, can be highly aggressive when ready to mate. Throughout the millennia, interested or not, the females have always had to endure the process – or be killed as they tried to run away.

Sadly, we all know that even modern-day Homo sapiens, boys and men who are otherwise kind and gentle, can quickly become predators when they allow that primal urge to control their behaviour.

So, what if, over the centuries, instead of grooming themselves to feed that masculine impulse, mothers and wives, aunts and sisters – fathers, brothers, uncles, and grandparents, too, had bonded together to help ‘their’ boys rewire, if only, that one aspect of their neural circuitry?

Imagine the ripple effect if the adults, as role models, had pushed on one conversation after the next – decade after decade, century after century?

What if similar conversations had been shared about the equal worthiness of little girls and women?

Surely, back then, if only in the era of Industrialisation, such conversations would not have been considered as ‘difficult’ and challenging as they are today.

Heads up: in this, the most modern of all eras, together and separately, we can generate a critical mass of pro-active humans who will burst the fashion bubble, the echo chamber which resonates with words like ‘sexy’, ‘sex appeal’, ‘sexy kitten’, ‘hot babe’, ‘seduction’ and ‘desire’ particularly when about girls and women – but not exclusively.

Of course, we can become a part of this critical mass of influence.

Surely, by the millions, more of us can become brave and coherent ‘disturbers’ instead of ‘enablers’ to bring change to the industries of fashion and change, too, o our idea of who we are, as boys and girls and as men and women.

Like bringing into focus what we are no longer willing see on the shelves of our supermarkets.

Like attempting to reach net-zero carbon emissions by 2050, or reducing our reliance on animal-sourced food, such an aeon-old cultural shift away from the feminisation of girls and women by their parents, relatives, and social media and fashion magazines, too, requires a critical mass of intergenerational influencers willing to make a difference.

So does de-emphasising the toxic aspects of masculinity.

That, too, requires each and everyone of us to be an active participant in change.

Aim: we take the long-view and fill it with many short-term shifts in awareness.

We do that, if not for our selves, then, for the boys and girls who will grow into men and women through generations to come.

In the meantime, together and separately, we all have the means to enable an ambitious short-term reduction target through emotion and thought control.

We know how we can dim down ALL gazes that objectify the human body, mostly that of girls and women.